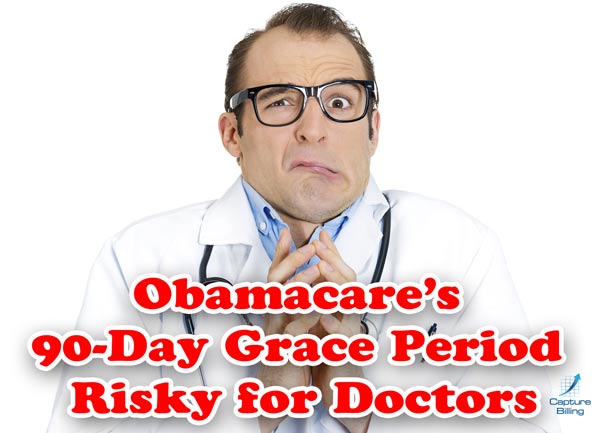 It’s never been more critical for healthcare employees to stay on top of changing legislation and the undoubtedly complex documentation requirements that accompany it.

Not only must physicians and practitioners be knowledgeable, the medical billing staff have to be on their A-game. If they aren’t, your practice’s revenues and financial stability will likely take a huge hit.

For example, when the Affordable Care Act (ACA) , also know as Obamacare, was first signed into law back in 2010, everyone knew it would be a game-changer.

However, many providers are only now identifying the extent to which their day-to-day operations have been affected. And while some parts of the law were widely discussed and publicized, other pieces of the legislation weren’t quite as evident.

Like the mundane-sounding, yet financially-impactful, 90-day grace period for government-subsidized health plans.  Essentially, this law means that any patient who purchased health insurance through the state exchanges AND who is also receiving tax subsidies to offset the cost, is granted a 90-day grace period in which their coverage cannot be canceled for non-payment of premiums.

For comparison purposes, insurance companies have traditionally allowed up to a 30-day grace period when premiums went unpaid.  By lengthening this timeframe and imposing restrictive mandates, insurers have seemingly shifted the majority of financial risk to providers.

Why is the grace period risky for providers?

As with any legislation, it’s all in the details. Here’s the highlights that you need to know.

If premiums aren’t paid, coverage will be canceled and then all pending claims can be retroactively denied. Plus, if any payments have already been made for services rendered during the same period, insurers can recoup those as well.

As you can imagine, this could prove detrimental to a practice’s revenues and wreak havoc with their billing. In large part, it’s a lack of information that is at the core of the problem. Currently, no fail-proof system exists to help providers identify:

Without this critical information, physicians are going out on a financial limb. They will continue to treat patients, assuming premiums have been paid and expecting reimbursement from insurers. In reality, they may actually be underwriting the cost of those services themselves.

The result means providers and medical billing staff have their work cut out for them if insurers won’t pay up; they must either pursue the patient for the balance or face potentially increasing amounts of bad debt write-offs.

So how can a practice minimize their risk?

Unfortunately, that’s a complex issue too. As noted above, there isn’t an easily accessible, consistent method to identify patients who fall under the scope of this law.

As expected, there has been a push for amended legislation to help protect providers from assuming such a large portion of the risk. In fact, Washington recently became the first state to take steps in this direction. Called prompt notification, the law requires all insurers within the state’s exchange to:

Providers who receive this timely information will be able to make better decisions regarding future treatment, including making payment arrangements with the patient prior to rendering services. It’s expected that other states will follow suit with similar legislation.

Besides advocating for prompt notification in their practicing state, providers can also take advantage of additional educational materials being offered by the American Medical Association (AMA).

In a statement released last month, President of the AMA, Ardis Dee Hoven, M.D., introduced the need for a compilation of resources. “Managing risk is typically a role for insurers, but the grace period rule transfers two-thirds of that risk from the insurers to physicians and health care providers. The AMA is helping physicians take proactive steps to minimize these risks.”

It’s important to note that under the existing ACA legislation, providers are entitled to receive notice when a patient has entered a grace period. However, the method and timeframe of notification is not mandated and can vary by insurer. Thus, leaving providers to navigate the processes of each insurer and, in reality, placing an unfair burden squarely on their shoulders.

Around here, we’ve been busy educating our clients about the 90-day grace period and how it will affect their billing cycle and revenue streams. If you weren’t already prepared, hopefully this crash course will get you back on track.

So how are you prepping to protect your bottom line? Please tell us in the comments!