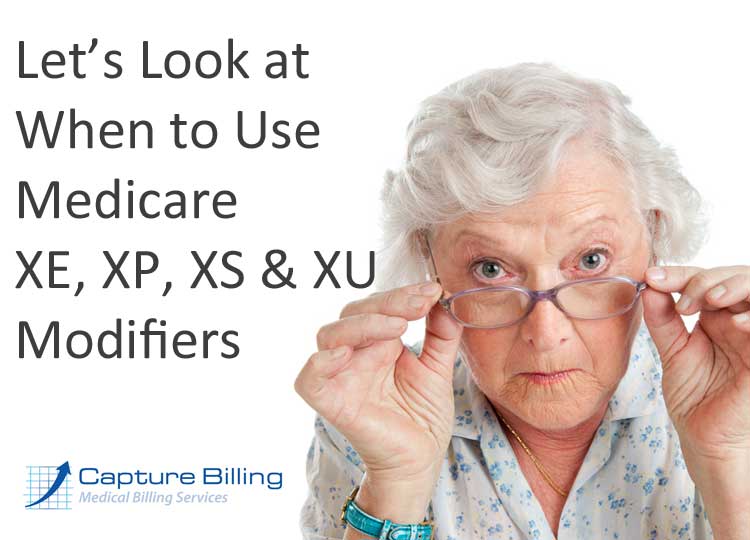 Effective January 1, 2015, CMS will officially roll out four new HCPCS modifiers, XE, XP XS and XU, that can be used when billing Medicare claims. Dubbed the –X{EPSU} subset, they may or may not be used instead of modifier 59.

Not very clear, right? Unfortunately, there hasn’t been much clarification from CMS about the modifiers either, leaving many physicians and medical practices confused.

So, today I’ll focus on a few examples of when you might use each of these new modifiers. And if you need more background information about why this code subset was created in the first place, this post explains that in detail.

But first, a review of the definitions.

When to Use Modifiers XE, XP, XS, XU

The following are potential scenarios is which the new Medicare modifiers might be used.

Remember that you’ll never use modifier 59 in conjunction with one of the X{EPSU} modifiers. They are designed to be used separately – it’s either one or the other.

Which, of course, makes this all the more confusing. Watch for CMS to provide further clarification and examples in 2015. And don’t be surprised when other payers begin requiring the more specific modifiers too, since they usually follow CMS’ lead.

Also check out my other post on these X{EPSU} modifiers.

Do you have more scenarios that may help other billers and coders? Please share them in the comment section below.

66 thoughts on “Medicare Modifiers XE, XP, XS, XU: Examples of When to Bill Each One”